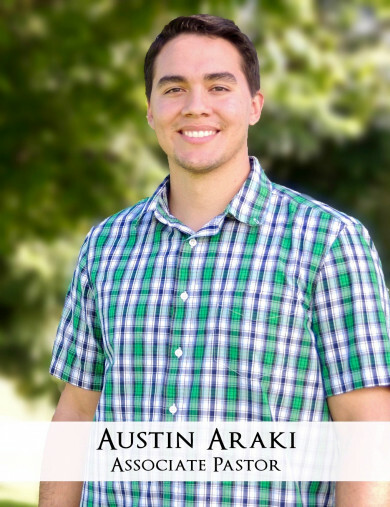 Hello, my name is Austin Araki and I have the privilege of working with young adults ages 11 to 18 as Calvary Chapel Pearl Harbor's Youth Pastor.

I was born on March 24th, 1992 in Anaheim California, and moved to Hawaii when I was five years old. I have two sisters and three brothers with the addition of three brother-in-laws and one sister-in-law. All of whom I love very much. However, the most important year of my life was 2000 (the year that I gave my heart and life completely to my Lord Jesus). By the age of eight, I had seen a drug addicted and unfaithful biological father, the divorce of my mother, and a sinful self. My soon to be adoptive father began taking my family to church, and shortly after, I received my Heavenly Father.

I felt God calling me to His ministry almost immediately after I became a Christian. Most people would snicker or give a confused, "Really?," when as a nine year old I told them I wanted to be a pastor. I became involved in teaching Sunday school with my parents (2 and 3 year olds), joined the Christmas play, sat in on every study, and took any additional Sunday afternoon classes offered by CCPH. My desire was that of Psalm 27:4 "One thing I have desired of the Lord, That will I seek: That I may dwell in the house of the Lord All the days of my life, To behold the beauty of the Lord, And to inquire in His temple." In 2006 and 2007, I help organize and lead Vacation Bible School mission out reaches in Samoa. I began teaching the middle school Sunday morning service in 2008, and was hired as the full time youth pastor in June of 2012.

I am now married to my beautiful wife, Kristin, who God has blessed me with. We met serving in ministry together and will continue by God's grace to serve Him side by side. In June 2014 we had our son, Ezekiel and a few years later in August 2017 had our precious little girl Everly.

After years of prayer, studying God’s Word, taking counseling courses and the support and prayers of my wife, family and church I was ordained on January 31,2016. The Lord has lead me to learn and serve in all things at CCPH. All glory given to God that He has allowed me to serve at Calvary Chapel Pearl Harbor.

Throughout my Christian walk I have been shaped to be the man I am, through the mentoring of my parents, other pastors at Calvary Chapel Pearl Harbor and leading my wife and children. That is why as the youth pastor I want to partner with parents to reach the next generation.